What do you feel when you look at the image above?

This pattern of light appeared just before sunset yesterday evening (11th March 2014). I recognise the pattern because I have seen similar patterns of light before. Here is one which appeared in 2005 when I was living in Wiltshire: 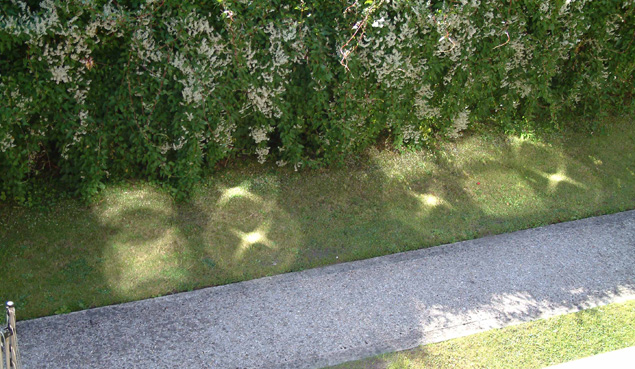 And this one appeared in 2011 while I was living in Cumbria: 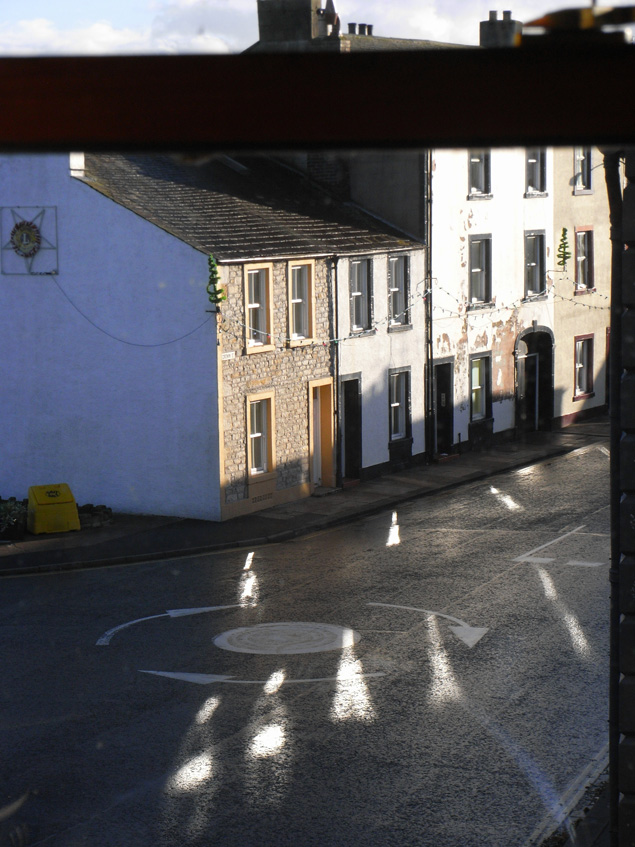 In 2005 I wrote an article about these patterns of light and I will republish the entire article at the end of this page. I can’t say for sure how these patterns are made or whether there is any kind of non-physical or spiritual intelligence behind them, but I can tell you what they make me feel: seeing unexplained phenomena like this make me wonder if there are other beings who share this planet with us, who work behind the scenes to aid our evolution. I truly hope that there are other beings who are concerned about our evolution and the health of planet earth.

Humans like to think they are the most advanced species around but when I look at what we have collectively done to this planet in the name of progress I sincerely hope that there are other species who are more advanced than we are and who want to help us.

When I sit down to write I often don’t know exactly what I am going to say or what I will be writing about. On many occasions it is like those old stage magicians who would have a handkerchief poking out of their sleeve and when they start to pull at the handkerchief a whole string of other handkerchiefs comes out – I see a glimpse of something and start writing, then as I continue to write I see so much more coming through.

I “know” that much of what I write comes from a non-physical realm and it certainly “feels” like I am not alone when I write. Whether this is because I am tapping in to some kind of collective consciousness, communicating with non-physical beings or whether I am simply doing what feels right for me, I don’t know. But that feeling, that there might just be other beings around, that they might just be here to help us and that, maybe, just maybe, one day we may recognise them openly in our society… that is a wonderful idea.

Imagine, with all the problems we have created on this planet, if there were other beings, more advanced than us, who could advise us on how we could put things right. Wouldn’t that be wonderful?

And now, as promised, here is the original article I wrote back in 2005 about these patterns of light:

The Mysterious Circles of Light

A Trick of the Light or a Message from God?

At 4.40pm on Monday 8th August I went to the window of my first floor apartment and looked outside.  It was a warm and sunny afternoon and I was relaxing after a walk in the country.  As I looked out I saw something rather strange: on the ground below me there were several circular patterns of light.  As I looked at these patterns my rational mind instantly decided they were nothing more than reflections from the sun as the light hit the surface of the windows.  But there was something else about these circles – although I had never seen them before they looked oddly familiar.  As I pondered this I realised that I had seen similar patterns in a magazine, Share International, which I had been reading about a week before.

Share International is a non-profit making publication set up to promote the work of Benjamin Creme.  Since 1974 Creme has been presenting to the public a message regarding the imminent return of a World Teacher, otherwise known as the Lord Maitreya.  To quote from the Share International website: “Many now expect the return of their awaited Teacher, whether they call him the Christ, Messiah, the fifth Buddha, Krishna, or the Imam Mahdi. Millions now know that the Teacher who fulfils all these expectations is already living among us.  Maitreya, the World Teacher, has not come alone, but with a group of wise Teachers who have long guided humanity from behind the scenes.  They are returning to the everyday world to help us solve our most critical global problems. Maitreya is not a religious leader, but an educator in the broadest sense.  He is here to inspire us to create a new era based on sharing and justice, so that all may have the basic necessities of life: food, shelter, health care, and education.”

According to the website, “Mysterious and beautiful patterns of light have been photographed on buildings and pavements all over the world: throughout Europe, the USA, Australia, New Zealand, Japan and Canada, and new sightings are happening more and more frequently. The patterns are created by sunlight reflected from windowpanes onto nearby surfaces such as buildings, fences, walls, or the ground, sometimes in huge, spectacular formations, which defy scientific explanation. Benjamin Creme explains that these miraculous light patterns are another sign of Maitreya’s presence in the world.”

A quick browse through the ‘Signs and Miracles’ section of the Share International website reveals an abundance of phenomena, all seemingly connected with Maitreya’s presence.  These include: crosses of Light; apparitions of the Madonna and Jesus; the discovery of wells containing water with healing properties; weeping statues; and holy messages appearing in fruit and vegetables to name but a few.  Of these occurrences Benjamin Creme writes: “Over many years Maitreya and his group of Masters have saturated the world with miracles.  All religious groups look for signs. It is through the signs that they know the teacher is in the world or is coming into the world.”

So what are we to make of all this?  As a journalist it is not for me to say whether these phenomena are ‘real’ or not: it is my job to present to you sufficient information to form your own conclusions.  I must admit that I scoffed at the idea of the ‘holy aubergine’ when it was first reported many years ago, but since then other experiences have made me wonder.

Benjamin Creme tells us that Maitreya is the current head of a Hierarchy of Spiritual Masters who have been guiding our evolution from behind the scenes for thousands of years.  Other Masters in the Hierarchy include the Master Jesus and the Masters Morya, Koot Hoomi and Djwhal Khul who inspired the writings of H.P. Blavatsky and Alice A. Bailey in the late 19th and early 20th centuries.  All of these Masters have completed the journey of human evolution that we are currently engaged in and their task now is to help us to complete the same journey to Self-Mastery.  According to Benjamin Creme, Maitreya has been living as an ordinary man within the Asian community of London since 1977 and he and his fellow Masters are ready to make themselves known publicly to the whole world as soon as humanity is ready.

It’s hard to criticise Mr Creme: he doesn’t charge an admission fee for his lectures; he has worked tirelessly for over thirty years promoting this message; apart from selling a few books – and we all need to make a living – he doesn’t appear to be profiting financially from his endeavours; and he doesn’t ask anybody to give up their possessions or donate large sums of money to the cause.  If Mr Creme is not telling us the truth then the only conclusion can be that he and all those involved in the Share International network are deluded.  But then if you look at a copy of the Share International magazine or read any of the articles on the website you will see that there exists, in Share International, a movement, which is entirely concerned with establishing peace and justice all around the globe.

The opening statement in the Share International magazine is Article 25 from the Universal Declaration of Human Rights, which states: “Everyone has the right to a standard of living adequate for the health and well-being of himself and his family, including food, clothing, housing, and medical care and necessary social services, and the right to security in the event of unemployment, sickness, disability, widowhood, old age or other lack of livelihood in circumstances beyond their control.”

Benjamin Creme tells us that the developed nations such as ours, which account for one third of the world’s population, use three-quarters of the world’s food and 83% of the other resources.  However accurate these figures might be, the fact remains that we have it pretty good in the West while millions around the world still live in absolute poverty.  The Share International Magazine is a mixture of articles highlighting the injustices of the world and articles that bring hope of real and lasting change.

In a world of politicians and fundamentalists, where few seem to be prepared to assume responsibility for making things better, all we seem to hear these days is groups of people with differing ideologies blaming each other for the things that have gone wrong.  I can’t help but feel that we do need the presence of a World Teacher to guide us back onto the right path.  Whether Mr Creme is right and the Lord Maitreya is about to emerge and show us the way remains to be seen; but for spreading a little hope and Light in this world of war and despair, Mr Creme deserves, at the very least, our respect and admiration.

Anyone interested in reading more about Share International can visit their website – www.share-international.org – and other examples of the mysterious circles of light can be viewed at